We are crossing into Canada.

It’s actually very friendly and pleasant. We had to let the border guards go through our tour bus, but again it’s all smiles and “Welcome To Canada”. We are in a venue called The Venue in Vancouver tonight, and because Canada is so together as a nation and actually sends donor registration forms out to every household there is no real need for Love Hope Strength ‘GET ON THE LIST’. It was a great room to play for. The manager, Destry, is a huge Alarm fan and saw us play with Pat Benatar in 1986. It’s a bit strange just playing a straight gig and not having to do the donor booth and the Love Hope Strength address before the show. It makes me realize how much a part of my rock and roll life ‘Love Hope Strength‘ is now. It’s almost like being on stage without a guitar.

I was in the dressing room before the show, and I started to get to grips with a new song that might just be the beginning of a new record for Mike Peters. It’s got something about it…. no title yet, but some words and a feeling to do something different…… we shall see…..

I like Canada as a country, and Vancouver as a city. Meet some great people after the show who have waited a long time to see Big Country and a lot of people who want to see The Alarm in Canada. All is good in the Great White North. 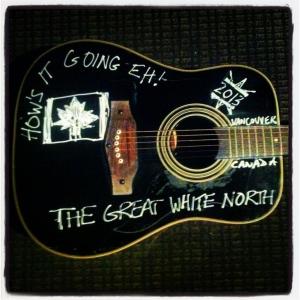