We spend most of today relaxing and catching up on all the news from home. A lunch with Richard Rees and a photocall at the ‘I love you so much’ spray can writing that has become something of a must do photo sensation in Austin. The spray can slogan was sprayed by the owner of Jo’s coffee shop‘s girlfriend and has caught on through Facebook and social media. A modern day phenomena. 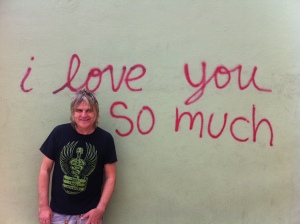 We have a tough drive to Dallas through the heavy traffic and just make it on time to the venue in the Deep Ellum district. ‘Trees’ is a fairly legendary venue that has seen performances from Nirvana and Pearl Jam to name but a couple, but I’m not sure if it has seen anything quite like the site of Big Country being piped onto the stage by the ten pice Fort Worth Scottish Drum and Pipe Band all dressed in full national Scottish dress with bag pipes and kilts. 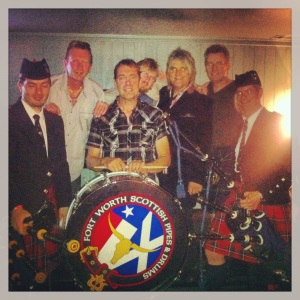 It’s a very moving start to the show and at the end of the night we bring the pipe band back up on to the stage to close out with ‘In A Big Country’.

Mike Peters – The Song That Changed My Life Documentary